Everyone knows the story of Columbus. He sailed the oceans in 1492 on a quest to map new routes to great riches in India. As always, we like to explore the plumbing side of topics. 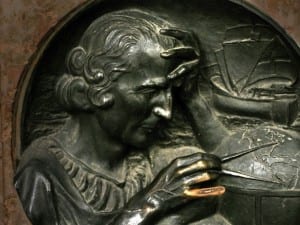 During the time of Columbus, the main means of long distance transport was through sailing. As technologies have evolved, so has plumbing. Efficiencies in plumbing and irrigation has not only improved crop yields and made going to the bathroom more convenient, quality plumbing has also positively affected health by minimizing issues related to inefficient sanitation.

Going #2 is not often #1 on many peoples’ lists of priorities. In the old days, a bathroom was exposed and did not have well-structured toilets. Thousands of years went by before plumbing was even associated with toilets. For centuries, even millenniums, going to the bathroom meant going outside or using a bucket. That was it. Whether that bucket was tossed often lead to sickness and death for others.

Plumbing wasn’t even introduced until Greek civilization. They civilization of Crete was the first civilization to use underground clay pipes for sanitation and water supply. They had a well-organized system for bringing in fresh and clean water that was also used to flush out wastewater and storm sewage canals for overflow when there was heavy rain. Furthermore, they are the first population known to introduce toilet flushing mechanisms.

Looking back, the plumbing industry has changed so much, and it is attributed to the early development of our ancestors who continually innovated to find solutions for a better living condition. We should be thankful for this because imagine what our world would be like now had there not been an effort to develop or innovate from “the bucket.”

The word “Columbus” is synonymous with the words: opportunity, discovery, advancement, journey and expedition. For that reason, Columbus Day is not just about commemorating the history of the discovery of New World but also to a celebration our human advancement and progress.